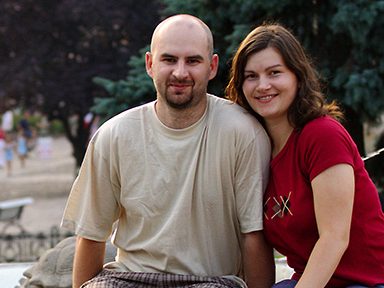 Peter started full-time ministry with Training Center Kompas (Josiah Venture’s partner organization in Slovakia) in 2004. Prior to this, Peter was a physics teacher and spent his free time with his youth group. Passionate about sharing Christ with non-believers, he and his youth group organized their first English camp in 2003, where 16 of his students and 30 more from his school participated. After camp, many of them visited the youth group, gave their lives to Christ, with several now serving as leaders in Peter’s youth ministry. In 2007, Peter took a step of faith to become the national director of English Camps for TCKompas where he helps, inspires and trains other youth leaders across Slovakia with this same ministry model. During his tenor, he took the camp ministry from three camps to nine. In 2010, Peter became the EXIT Ministry Director where he is currently organizing this new ministry to reach the entire nation through EXIT Turbo Small Group program and EXIT Tour. Locally, he and his wife, Katka, live in Presov, where he serves as an elder of his church, and supports the youth leaders. Katka works in the church’s book store located in the center of town.